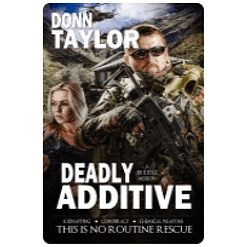 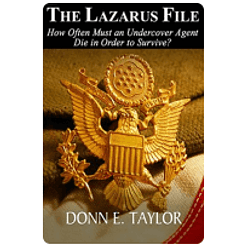 Read an Excerpt from The Lazarus File

How Often Must an Undercover Agent Die in Order to Survive?

The United States, caught in a dangerous game of global espionage, turns a CIA agent working deep under cover as a drug pilot in Colombia to protect a powerful and prominent woman held hostage in Columbia.

Trapped in an industrial conspiracy that threatens to destabilize the Americas, the reluctant pair seeks to prevent an international terrorist strike aimed at the heart of the United States. Held captive in a remote Andean valley near the Bolivian border, the couple fights to save themselves and their respective counties.

Written for the General Market (G) (I): Contains little or no;

Lighthouse Publishing of the Carolinas

"THE LAZARUS FILE features a man of his word and a woman of convictions, compelling characters that readers will follow eagerly through a world of shifting loyalties and deadly intrigues."
--- Gwyneth Atlee,
Author of Canyon Song
and Against the Odds
~
"Taylor is a natural story teller who displays the rare ability to convey emotion without resorting to profanity and to convey passion without specifying body parts.
Set against Colombia's forbidding landscape and populated with memorable characters, the novel images a classic confrontation of good and evil."
--- Carlos Ledson Miller, Author of
Panama and Belize
~
"Like the best of Robert Ludlum."   --- Bev Vincent,  Author of  The Road to theDark Tower
~

Kidnapping - Conspiracy - Chemical Weapons - This is no routine rescue!

Read an Excerpt from Deadly Additive

To soldier-of-fortune Jeb Sledge, the assignment seemed simple: Rescue an heiress and her journalist friend from Colombian guerrillas and collect a sizable paycheck for his troubles. But things rarely go as planned.

After stumbling upon a mass of dead bodies, Kristin Halvorsen isn't about to leave Colombia without the proof she needs for the story of a lifetime, and Sledge soon finds himself ensnared in a chemical weapons conspiracy that involves civilians, guerillas and high-ranking government officials.

But neutralizing the factory isn’t enough. Where are the weapons that have already been fabricated? Who are the intended targets? How potent and far-reaching are the effects?

A pursuit through South America, the U.S. and the Caribbean embroils Sledge and Kristin in a mission to prevent a catastrophic attack—and leaves Sledge fighting to save both their lives.

"A fast-paced, exciting read, with bigger-than-life heros and villians.
It was over much too quickly."
--- Chris Rogers,
Author of
Rage Factor,
Chill Factor, etc.
~

“An edge-of-the-chair plot in prose that reads like satin, with a nails-tough hero who still has time for introspection.”
--- Donna Fletcher Crow, Author of
A Darkly Hidden Truth - The Monastery Murders 2
~
“I loved Deadly Additive!
In this wonderfully written story, Donn Taylor offers up a perfect blend of suspense, intrigue, humor, romance, and inspiration.
I savored every page and didn’t want it to end.”
--- Ann Tatlock,
Award-Winning Author of
Traveler’s Rest
~
“Donn Taylor continually thrusts his two leading characters into impossible situations, but their escape is always believable.
His characters are well drawn, authentic.
You find yourself physically trying to help them out of a certain-death trap.
I recommend it without reservation.”
--- James Callan,
Award-Winning Author of Cleansed by Fire
~

"Donn Taylor takes the reader on an exciting ride all over the world. Sledge is a hurting mercenary who finds love in the jungles of Colombia.

He doesn't recognize his feelings for Kristin until danger and chemical weapons abound.

A unique plot and sympathetic characters make this a fast read."